Theorem: The odds of you encountering any given person -most notably when walking around a corner, passing through a doorway, etc. – are in direct correlation with the amount of shit you are talking about them. 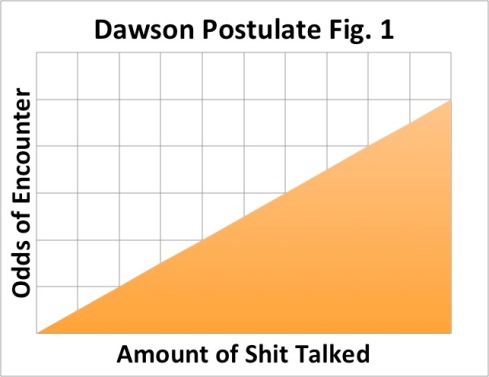 As you can see illustrated in Fig. 1, we can extrapolate that as the amount of shit-talking approaches its upper limit, the probability of encounter approaches one.

In my studies, I have found the Dawson postulate most often exemplified on cross-country track team work out runs.

The principle itself is named for Max Dawson – a snarky brown-noser who was often an object of ridicule for teammates. At 18, he was still a tattle-tail.

My teammates and I used to go on what we called, “Grievance Runs.” They’re about as cathartic as they sound. One person would simply state, “I have a grievance.” Once we were sure no one else was in ear-shot, someone else in the group would reply, “We are prepared to hear your grievance.”

Grievances could be something as vague as people who wear socks with sandals, or as oddly specific as people who wear long skirts but pull them up higher to make them more revealing. They can also be about a specific person. A large chunk of our grievances tended to center on the women’s track team. That was pretty much our only dating pool, since we spent most of our free time at practice.

The course we ran on involved many intersecting trails; we often turned a bend or crested a hill, only to find ourselves face-to-face with the subject of our grievance. And no matter who you were complaining about, rest assured if you ran into Max, he would run and tell. After more than a few laughably embarassing mishaps, we started to get careful.

As obnoxious as Max was, he taught an excellent lesson early on in my life, before it really mattered. When on the road, you never out-drive your headlights; when talking shit, never out-gossip your line of sight. Understanding that can be the key to saving friendships, marriages, and even careers.